The worldwide debt cap rules were repealed effective from 1 April 2017 and have been replaced by the new corporate interest expense rules.

The motivation behind the new rules is to restrict the amount of tax relief for interest expenditure claimed by large or multinational groups that are highly leveraged.

For companies that have a year-end spanning this commencement date (e.g 31 December 2017) the results for the period will need to be split between pre and post 31 March 2017. This will usually be on a pro rata basis, unless this leads to an unfair result.

For these purposes ‘group’ follows the accounting definition and so will consider the largest group for which consolidated accounts are prepared. The parent of this group is the ‘ultimate parent’. Where there is a change in ownership the group will change and any excess capacity (see below) would be lost.

The main exemptions (only one is required) to applying the rules are:

The Corporate Interest Restriction legislation in Part 10 Taxation (International and Other Provisions) Act (TIOPA) 2010 applies from 1 April 2017. Minor technical amendments to that legislation are included in the current Finance (No.2) Bill.

The rules are very complex covering hundreds of pages of legislation and 577 pages of HMRC guidance and so this update only covers the main concepts and not the full detail. Where these rules are relevant it is important to perform detailed calculations as there are a number of potential elections that can be made which can produce different results.

The principal of the new rules is that, where the exemptions are not available, groups and individual companies must consider whether the aggregate net interest expense for the UK companies within the group is too high by reference to:

iii) The ratio of worldwide net interest expense (also known as ‘QNGIE’) over group EBITDA (‘Group ratio rule’).  This third condition is optional and should only be considered if the fixed ratio for the second condition exceeds 30%. 100% is used where the group ratio exceeds 100% and 30% where the ratio is less than 30%.

We have produced a flowchart to summarise the approach that should be taken in the appendix. It should be noted that this is a simplification of the main rules as it applies to year 1 and does not include the impact of excess brought forward interest capacity and excess debt cap which may be relevant after year 1. 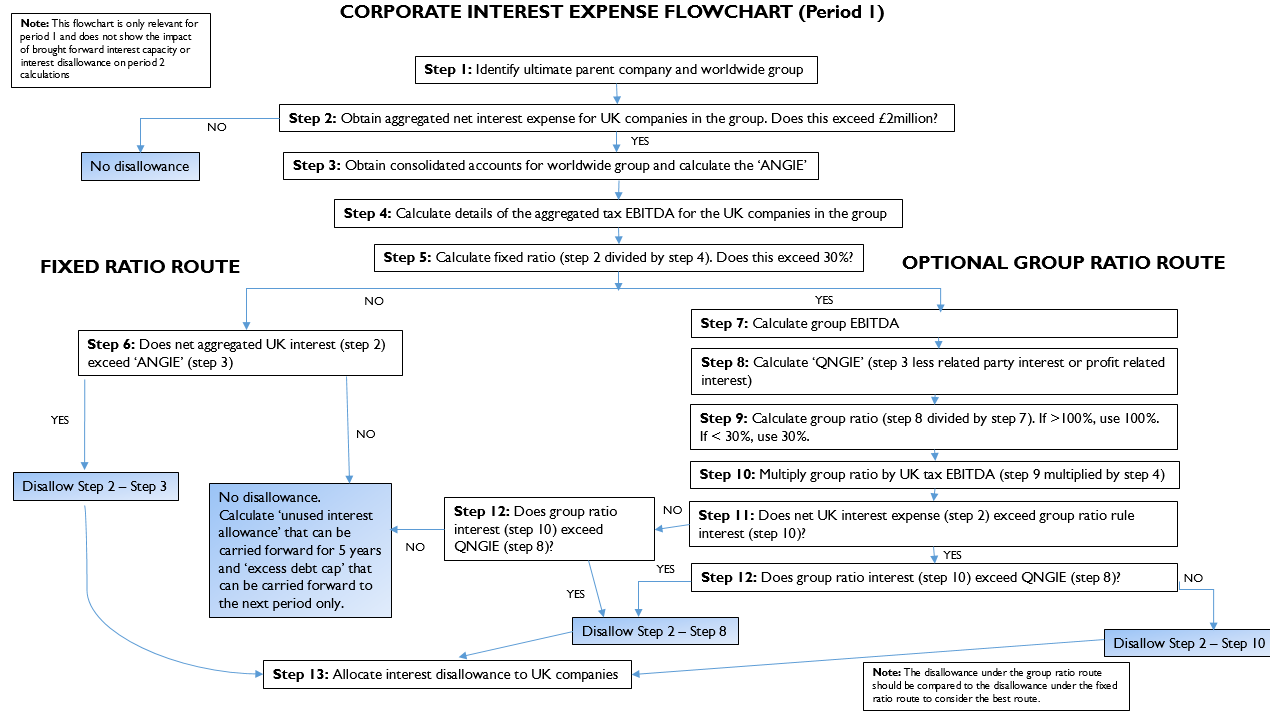 HMRC’s default approach is that any disallowed amount will be allocated to UK group members on a pro-rata basis.

A reporting company can be nominated to allocate the disallowed amount on an alternative basis, in any way the group decides is appropriate.  The only restriction is that the allocated disallowance cannot exceed an individual company’s net interest expense.

Where the group companies do not consent to the group allocation, HMRC have the power to allocate the disallowance on a pro-rata basis.

Where there is ‘unused interest allowance’, this can be carried forward on a group basis for up to 5 years, to be utilised in future years. This will arise where the fixed ratio interest, or group ratio interest (where a group ratio election is made), exceeds the net UK interest for the group.

However if the ultimate parent changes then any excess capacity or unused interest allowance will be lost.

The ‘excess debt cap’ applies in limited situations where usually a disallowance arises due to the modified debt cap (‘ANGIE’ or ‘QNGIE’), but in that particular period the fixed ratio or the group ratio is the limiting factor. The excess debt cap is calculated as (ANGIE - 30% x UK tax EBITDA) if the fixed ratio rule is used or (QNGIE - group ratio % x UK tax EBITDA) where there has been an election to use the group ratio. This can be carried forward just to the next period and increases the ANGIE for that period, where the modified debt cap (‘ANGIE’) is the limiting factor of the next period.

The rules contain a lot of detail on what should and shouldn’t be included in the definition of interest. This is unfortunately not simply the case of taking the figures from the finance income and cost note of the accounts for the group figures or from the tax returns for the UK interest figures. This is because certain items on the balance sheet will need to be included (e.g capitalised interest) and certain items in the finance income and costs notes will need to be excluded (e.g exchange gains and losses and impairment losses and reversals). There are also a number of elections available in relation to movements on derivatives.

This needs to be calculated from each company’s corporation tax return, adjusted to remove interest, amortisation, capital allowances and group relief. There is an option to exclude fair value movements on derivatives. This works in a similar manner to the Disregard Regulations.

MECHANICS OF THE RETURN

The corporate interest restriction (“CIR”) return is separate to a company’s corporation tax return.  The deadline for filing the CIR return is 12 months after the end of the relevant accounting period.

There are two types of return, an abbreviated return and a full return.  It is also possible to file no return, where there is no disallowance in the period and HMRC have not appointed a reporting company.  However, not submitting a return may lead to missed elections and allowances in later years.

Alternatively, HMRC can nominate a reporting company within 3 years of the year-end.  Guidance suggests that HMRC will do this if there is any disallowance under the rules.

The reporting company must notify the eligible companies that it has been appointed.  It will be granted statutory powers to require the relevant data to complete a CIR return from other UK group companies.

An abbreviated return can only be used where there are no disallowances or activations and the group does not wish to carry forward unused interest allowances.  It is useful if the group wishes to make elections, which cannot be made if no return is submitted.

A group can choose to file an abbreviated return initially and a full return at a later date (within the amendment window) if they wish to do so.

The return will contain details of the group’s net UK interest expense, its interest capacity and the allocation of any interest which is restricted under the rules between UK members of the group.

The new rules are complex and will require detailed calculations where the £2million net UK interest de minimus threshold is exceeded by the UK members of a group.

It is recommended that the expected impact on the group in the current year and future years is modelled as soon as possible so the best approach can be considered, in particular for any elections that may be available.

Groups that could potentially be affected by the new rules, either in the current period or in the future, should consider appointing a reporting company within 6 months of the first accounting year-end after 1 April 2017.