Charitable Incorporated Organisations (CIOs) were introduced by the Charities Act 2011 and became available for new entities in 2013.  Until recently, only unincorporated charities could convert into a CIO.

Since 1 January 2018, existing charitable companies have been able to convert into a CIO structure, which has led to a number of charities reassessing their requirements and determining which structure is more suitable for their needs.  With CIOs becoming more popular, the choices for those governing or establishing a charity are now wider.  This guidance looks at the available options and considers the key aspects of each.

For guidance on converting an existing company into a CIO, please see our Charities Update – January 2018.

There are five main types of charity structure: 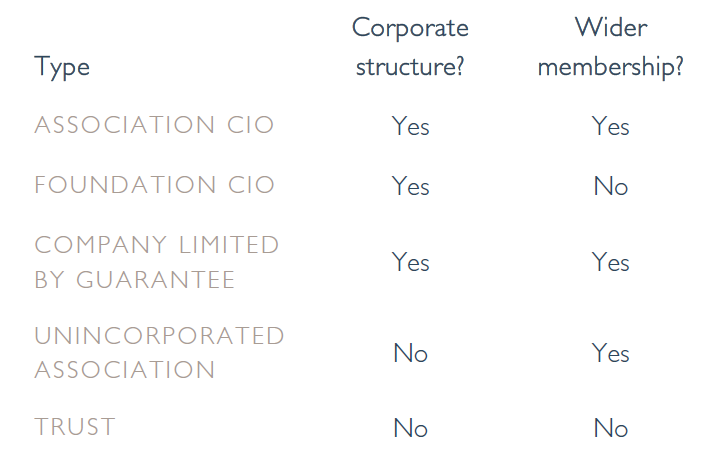 The guidance below gives an overview of the properties of these various structures.

A charity established under a corporate structure is a separate legal entity and may do a number of things in its own name. These include employing staff, delivering services under contractual agreements, and owning land and property.  The trustees will not normally be personally liable for the activities of the charity.

Companies must be registered with both the Charity Commission and Companies House, and will need to meet the filing requirements of each.

An unincorporated charity does not form a separate legal entity. As a result, the trustees are personally liable for the charity’s activities.  Two or more trustees, a corporate custodian trustee or a charities’ land holding service will have to hold any land on the charity’s behalf and the charity is not able to enter into contracts or control some investments in its own name.

Charities with wider membership can have members who vote on important decisions.  For example, they may hold an Annual General Meeting for members, or appoint committees to oversee the charity’s operations.  This is known as having an “open” membership. The charity cannot be set up only for the benefit of its members unless a sufficient section of the public can access those benefits by becoming a member, or unless the structure is suitable for the charity’s public benefit purposes (an example of this would be a sports club).

Charities without wider membership are run solely by the trustees who make all decisions on the charity’s behalf. This is known as a “closed” membership.

Association CIOs have a constitution as a governing document. An association CIO may have voting members other than the trustees, and so has an open membership.  They come into existence once registered with the Charity Commission.  Regardless of income, the CIO must send its accounts and annual return to the commission each year.

Unlike commercial companies, a charitable company cannot distribute reserves to its members or shareholders. Its assets can only be applied for charitable purposes (or to support its charitable activities), and the trustees (who are also the directors for company purposes) must govern the company in the best interests of the charity, whose purpose is governed by its articles of association.

These are used if a wider membership is needed but a corporate structure is not wanted; for example for smaller charities who do not wish to be burdened with Companies House filing requirements.

Trusts are neither incorporated nor do they admit a wider membership. They are governed by a trust deed.  As a result of the Trustee’s personal liability for charity liabilities, this structure is most suitable for a charity which intends to make grants but does not plan on engaging in any other form of activity (for example fundraising from the public or employing staff).

Both an association CIO and a charitable company are incorporated entities and admit a wider membership.  Care will need to be taken in deciding which structure to use.

However, unlike a company limited by guarantee, a CIO only exists while registered with the Charity Commission.  If the CIO loses its registration then it will cease to exist. A company limited by guarantee will no longer be registered as a charity, but will continue to exist as a company (due to its registration on Companies House).  Small companies limited by guarantee can benefit from simplified filings, while CIOs are required to submit information to the Charity Commission each year regardless of size.  In addition, the Charity Commission does not currently maintain a record of charges over property, and so lenders may be more reluctant to provide secured borrowings.  It is also worth considering that certain donors and third parties may be unfamiliar with the CIO structure as it is relatively new, although this difficulty is reducing over time as CIOs become more widespread.