The hybrid mismatch rules are aimed at counteracting tax mismatches where the same item of expenditure is deductible in more than one jurisdiction or where expenditure is deductible but the corresponding income is not fully taxable (or the income is taxed at a beneficial rate or is deferred to a future period). The rules were introduced in response to the OECD’s base erosion and profit shifting (BEPS) project and the EU Anti-Tax Avoidance Directive (“ATAD”).

The rules can apply to all types of deductions, including intra-group fees and payments for goods and services, as well as financing transactions.

There is no exemption from the rules based on the size of the company or transactions involved.

As the rules are mechanical in operation and do not contain a purpose test, they can apply to wholly commercial transactions. The starting point is to identify a mismatch in the tax treatment within an arrangement and then consider if it is the type that falls within the scope of the rules.

WHO IS LIKELY TO BE AFFECTED BY THIS LEGISLATION?

Groups with a UK or overseas parent involved in cross-border or domestic transactions involving a mismatch in the tax treatment within the UK, or between the UK and another jurisdiction, which falls within the scope of the legislation. Although the principal concern is with related party transactions, the provisions can also apply to transactions between parties that may be unconnected otherwise than in relation to the transaction under consideration.

TRANSACTIONS CAUGHT BY THE RULES

The legislation targets specific types of mismatches, setting out the conditions to be satisfied in each instance, and what adjustments are to be made for corporation tax purposes to counteract the mismatch (see Appendix A).

An example of a hybrid entity would be a UK LLP if it is treated as transparent by one jurisdiction (UK), but treated
as opaque by another jurisdiction. This could lead to a receipt by the LLP being untaxed in both countries if the LLP’s members are based outside the UK. Permanent establishments can also sometimes result in similar mismatches.

An example of a hybrid transfer would be where a person sells shares to another party on condition that the shares will be returned 12 months later, during which time a dividend is paid in respect of those shares to the transferee. In form, the ownership of the shares has transferred and therefore the transferee is treated as the beneficial owner of the dividend. In substance, however the transferor has not actually sold the shares and therefore may be treated as the beneficial owner of the dividend. This asymmetry presents opportunities for obtaining a deduction/non-inclusion mismatch.

The legislation is drafted to deny a deduction for payments by a UK company where the recipient is not taxed on the corresponding receipt and/or also obtains a deduction for the same amount and that mismatch arises as a result of the differing tax treatments of the financial instrument under which the payment is made.

The legislation will also impose tax on a UK company on what might otherwise have been exempt income where the payer obtains a tax deduction for that payment which is not otherwise counteracted under the anti-hybrid rules in the payer’s jurisdiction.

On the whole, the rules apply only where the parties to the arrangement are “related”. This predominantly means companies which are consolidated for accounting purposes or where one party participates in the management, control or capital of the other or has a 50 per cent investment in that other company.

It is necessary to understand the chain of any linked transactions and the overseas tax treatment throughout a chain.

A common arrangement for private equity structures is for a parent company (e.g. incorporated in Luxembourg) to be financed by preferred equity certificates (or “PECs”) issued to its private equity investors. A UK subsidiary then borrows on interest bearing terms from the parent company.

The interest expense will be deductible in the UK as recognised in the accounts and the corresponding income would be recognised in the accounts of the Luxembourg parent company and taxed at the standard rate. There is no mismatch in the treatment of the loan interest and the hybrid rules should not apply as a consequence of this part of a common chain of transactions.

However, where the mismatch might arise is in the treatment of the coupon on the PECs between the parent company and the private equity investors. If this is the case, the UK company may be required to self-assess a disallowance of the interest expense on its borrowing from the parent company.

This assessment will require a good understanding of the tax treatment of each private equity investor, to determine whether there is a mismatch and its nature. It could be that the mismatch is only one of timing; for example if the investor is a US company which is taxed on a receipts rather than accruals basis. However, there could be a more permanent mismatch from non-taxation of the income if it is received in a tax haven or benefits from a tax exemption regime.

Timing differences between a deduction being made in one entity and being treated as taxable in another entity, of less than 12 months rom the end of the relevant accounting period will not result in an adjustment under the rules. However timing differences of more than 12 months could result in an adjustment unless HMRC consider that it is ‘just and reasonable’ for the income to arise in a later period.

The rules are complex; as illustrated by HMRC’s guidance which runs to almost 400 pages and the revisions to the legislation announced in Finance Acts 2018 and 2019.

A methodical approach is required to identify any mismatch in the tax treatment within an arrangement and then consider if it is of a type which falls within the scope of the rules.

HMRC has confirmed that it will consider non-statutory clearance applications in respect of the application of the mismatch rules where there are points of genuine uncertainty. However, they will not give a view on the application of targeted anti-avoidance rules, whereby structures are put in place to attempt to circumvent the legislation.

APPENDIX A:  TABLE OF MISMATCHES, PRIMARY RESPONSES, THE DEFENSIVE RULES AND SCOPE

The legislation is split into 14 chapters, with chapters 3 to 11 explaining the rules for each type of mismatch. The table below provided by HMRC summarises the mismatch, primary response, defensive rule and scope of each chapter. 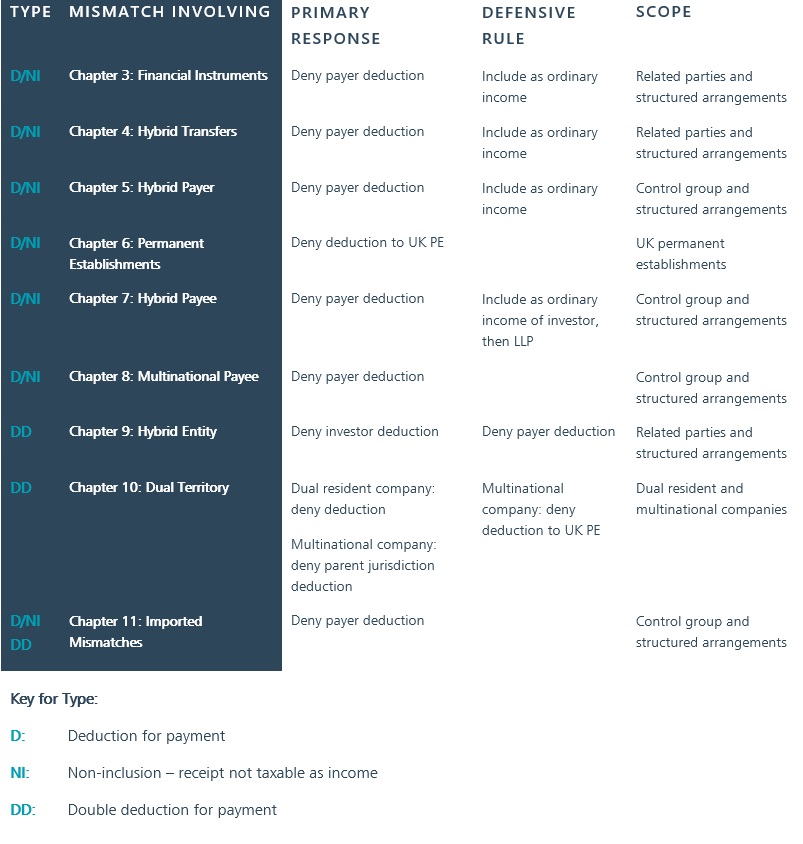